Formerly the GMAA/Grover Loening Scholarship Fund, the Fund’s name was changed in 2004 to honor the endowment and substantial impact made to the South Florida aviation industry and community by the late George Batchelor. Thanks to a significant contribution made by Batchelor in 1994 and by the Batchelor Family and Foundation in 2003, the Fund has awarded over $350,000 in scholarships. 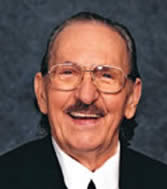 Born in Shawnee, Oklahoma in 1920, George E. Batchelor was a renowned aviation pioneer and philanthropist in South Florida. He was a pilot for 65 years, learning to fly at the young age of 16. In his 20s Batchelor helped design the P-51, which was manufactured by North American Aviation during World War II, a war in which he served his country as a decorated aviation officer, transport and bomber pilot.

George started Arrow Air in California shortly after the war, operating from a tiny hut at Lomita Air Strip. He soon purchased his first aircraft, a DC-3 in 1947, which he flew solo back to California from Hawaii and then sold for a profit. These events began his career as one of America’s greatest aircraft-trading entrepreneurs. He subsequently moved to Miami in 1964, and reinvested his profits, thus establishing Batch Air, one of the leading aircraft maintenance facilities in Miami. Around the same time George formed International Air leases (IAL), which became one of the most famous aircraft trading names in the aviation industry. After selling Batch Air in 1987 and IAL in 1999, Mr. Batchelor established Aerospace Finance Corp. and its affiliated companies, actively presiding over his businesses until the last few months of his life.

In 1990 Mr. Batchelor founded his private foundation, The Batchelor Foundation, to provide charitable gifts to aid the welfare of children and the natural environment. In addition to supporting aviation scholarships, the Foundation has benefited the University of Miami, the Community Partnership for the Homeless, Miami Children’s Hospital, Miami Metro Zoo, and Audubon.

Each year the GMAA, in conjunction with its Batchelor Aviation Scholarship Fund, hosts the Annual Wright Brothers Memorial Awards Presentation and Golf Tournament. The Annual Awards honor individuals for their substantial contribution to the aviation industry and community.

Note: scholarship funds must be used within one year of receipt.